Good news + updates about our book, plus free snippets + meet the 24 authors.

Listen in! She Dances Her Way Back to Happiness

Lili moves through a messy process of realizing divorce is looming in her marriage, and she resolves to set herself free while remembering what truly makes her happy during this difficult transition.

Listen to Lili's journey as she follows the messages from her soul.

Lili Krnic resides in Toronto. She spends as much time as she can doing the things she loves, including writing, dancing, traveling, and hanging out with her loved ones. Despite a few setbacks, she still believes in love and kindness and likes to seek out the beauty in life.

Listen in! She Begins Hearing Her Soul by Isabella Aponte

Chapter 3 ~ "She Begins Hearing Her Soul" by Isabella Aponte

Listen to how Isabella hears her own internal answers after growing up in a religious family with spiritual beliefs that no longer resonate with her, and how she begins to ask deeper questions about her path.

Isabella Aponte is a Creative Writing teacher at a middle school in Philadelphia, Pennsylvania. This is her first published piece of writing. She plans to continue her passion for education and writing, by following wherever her soul may lead.

She Follows Her Stars To Deeper Enlightenment

What if your biggest challenge, deepest vulnerability, or worst fear was only leading you to more of your own inner light? Dominique shares in her special story how connecting with astrology helped guide her forward after false starts and disappointments in her career. She learned more about her own powerful journey, as well as the timing of it all.

Dominique Jaramillo is an Astrologer, wife, mother and lover of all things mystical. She lives in Los Angeles, CA and enjoys teaching and guiding others with readings that inspire self-discovery, confidence and compassion. She is the creator of Conscious Astrology Wear for women and kids and you can learn more about her offerings at www.NurturingAstrology.com

Thank You! Another Donation Made To Women for Women International

Thank you for your support and connection to our book! We are proud to share with you that another donation has been made to Women for Women International as more people around the world purchase our special collection of soul stories.

One of our driving intentions is to create more abundance, in all forms, and it is very rewarding to see this continue to take shape.

We are opening up to share our journeys as rewarding, enlightening, and fascinating adventures into deeper soul wisdom. Putting it all down on paper allows us to see ourselves in a whole new way. And when we share the wisdom, we connect with thousands of other women who can (possibly) relate on some level, too.

We are allowing our journeys to be a source of timely inspiration for more women who are looking for support and understanding. These 24 experiences could be exactly what someone else needs to read about in order to understand their own lives better. The ability to inspire with our private life journeys is beyond measurement.

We wish to take our personal narratives and transform them into a vessel of ongoing abundance for more women around the world. Together, we offer a special book with powerful messages that will benefit women from war-torn countries as they rebuild their lives. Then these women create ripple effects of change in their families and communities. The abundance continues on.

Please spread the word and let more people know about our book.

Thanks again for your support and rave reviews!

Listen In! Introduction + She Unmasks Her Inner Magic

Chapter 2 ~ "She Unmasks Her Inner Magic" by Hydee Hall

Hydee was an only child and learned to wear various masks to protect her energy while growing up. In her soul story chapter, Hydee shares how she connected with spirit and received support for being - and living - as her authentic self to truly find and love her inner child. Listen to how she does that in this chapter from our book, "Modern Heroine Soul Stories".

Hydee Hall lives in southern California with her hubby Kevin who thinks her "woo woo" stuff is literally LOL funny - but he supports her with unconditional love! Being a typical female Virgo, she is constantly evaluating herself to be a better version and explore life to its fullest in the absence of fear. After raising 3 boys, she feels she's really stepped into the adventure of connecting in depth to her soul and the synchronicities the Universe puts in her path.

#1 International Bestseller - We Thank You!

THANK YOU for making our book a #1 International Bestseller!

Modern Heroine Soul Stories is at the top of the charts in Canada and Australia right now, and at an exciting #2 in the UK - WOW!

But the very best part is that now we can support even more women around the world improve their lives since we are donating all book royalties to Women for Women International.

Please help us in continuing to spread the good vibes and share with more people! <3

The Kindle version is on sale for only 99 cents USD right now.

You + Us = Helping More Women Together 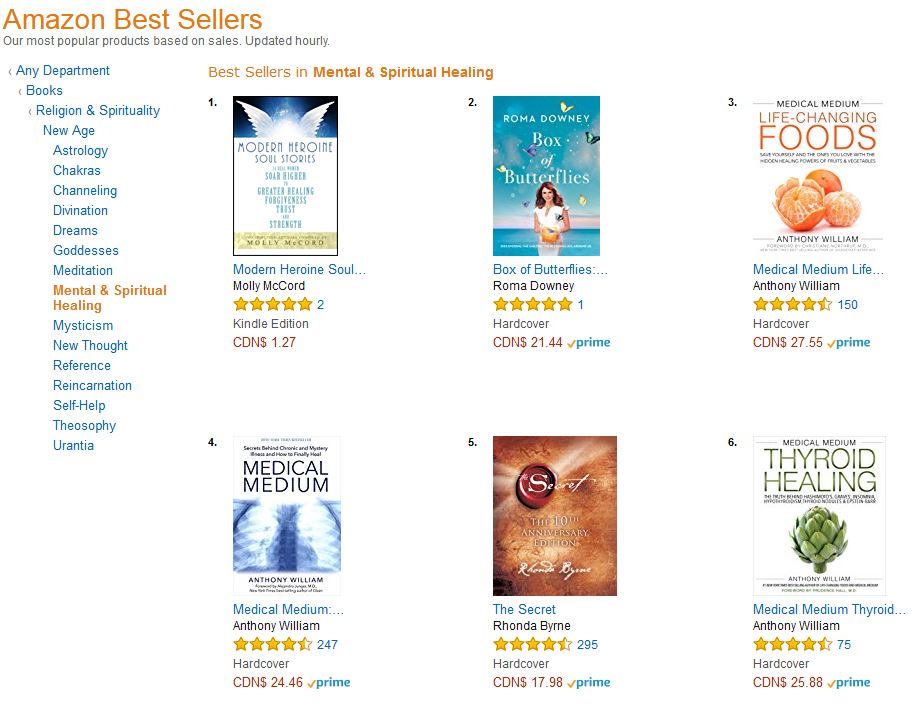 Give with us on #givingtuesday

Give a paperback copy to her &

1. Buy one or more paperback copies of Modern Heroine Soul Stories on Amazon (U.S. site only).

3. Benefit women worldwide with every paperback purchase for #givingtuesday!

All book royalties donated to Women for Women International.

Thank you for giving big with us on #givingtuesday!

- Offer available only on Amazon.com in the United States.

- Paperback copy must be bought from Amazon directly and no other vendor.

- One free Kindle download per a purchase, no matter how many paperbacks are purchased.

First Donation Made to Women for Women International

Yay! We're so proud to tell you that we just donated $1000 to Women for Women International from our "Modern Heroine Soul Stories" book sales!

Thank you for your support!!

Please continue to spread the word about our special book and ALL of the incredible messages in it!

We hope these 24 essays inspire and support YOU on your path....just as this book can support more women around the world improve their lives.

be sure to tell your favorite ladies and soul sisters about it!

"What do I want? Those four little words were something that I never really gave any great thought to until about eight months ago.

I finally realized that I had spent the past 29 years of my life on auto-pilot without really noticing it. Then someone asked me what I wanted, and I was lost. I had no idea where to start.

I guess sometimes in order to start, you have to go back, so let me take you back in time to where my first life dream began.

I was four years old and sitting on the plush carpet of my bedroom with my childhood dog, Murphy, sitting patiently in front of me. A stethoscope was in my ears as I listened intently to his heart, with a line of stuffed animal patients waiting for Dr. Lauren to check them next. I was practicing being a doctor on this captive audience since it was what I wanted to be when I grew up.

Well, I thought I wanted to be a doctor; I really just wanted to help people. So at the ripe age of four, I thought it was my only option in life and it stuck. It stuck until I was 24.

But all of that was about to change on this February morning."

Have you had a life dream abruptly change - and then felt lost as you created a new one? Read Lauren's exploration of discovering what she wanted in her life NOW that was ultimately a better fit for her life and heart.

"My husband woke up, turned over in bed, and announced our marriage was over.

In a matter of days, I had packed up my entire life, moved myself and my daughter into a new home, regrouped, and began anew. I had gone from having a roof over my head, a partner who supported my vision, and being able to focus on being a mom and building my business, to having less than five months of living expenses in the bank from my marriage settlement.

At the time of that unexpected divorce, I had thankfully discovered my life's purpose and passion: helping families live healthier and more abundant lives. I was a regularly featured expert on local news stations in San Diego. I had been on a national television talk show and numerous radio shows, and was collaborating with other thought leaders in my industry.

The seeds I had planted in the early years had begun to sprout, and it was an exciting time.

After my divorce, I continued to follow my business plan, which was to continue to build my online community of parents and launch my parenting course that I had been working on for almost a year. I had more television and radio appearances. I was interviewed on NBC's The Today Show, and The New York Times asked me to write an article.

I saw all of those opportunities as a sign that I was in alignment with what I was here to contribute to the world, and my task was to show up, work, and trust what came my way.

I had lined up four massive opportunities. If any one of these four came to fruition, I would be in great financial shape. Except that didn’t happen.

I went from being hopeful, empowered, excited, and eager, to not sleeping a wink at night, judging myself harshly for being in this situation, questioning my path, and feeling desperate."

When survival is on the line, it is easy to sink down into despair and feeling powerless. Yet Erika proceeded ahead with a focus on her core values and priorities, which helped guide her through this time. Discover what she did and how it could help you on your path during times of uncertainty, too.